As 2020 has been the year that no one could predict, staying informed and connected has really become a vital part in sustaining the economy of the region. Business adaptability has been tested and education and training providers have had to restructure their programs to adhere to restrictions.

One of the hardest hit sectors has been the hospitality and tourism sector with the international market no longer a viable market and with many businesses having to close for months, it certainly has tested many with a few unfortunately, choosing not to reopen their doors.

As the region looks to sustain its economy, we must acknowledge the current unemployment rate. The Labour Market released the July 2020 figures outlining the Wide Bay unemployment rate was sitting at 10.2% with Youth unemployment at 24.2%. Although these statistics are startling, the Fraser Coast region has been able to reduce unemployment in previous years and through connection, we at Jobs Fraser Coast, believe we can once again reduce the unemployment figures. 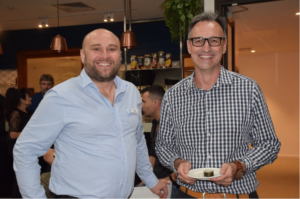 On the 13th of August 2020, Jobs Fraser Coast, with the assistance of TAFE Queensland held its first industry networking event to better connect local business with education and training providers. The evening saw a wide array of representatives within the Fraser Coast community attend to network with new as well as some familiar faces. The evening held three guest speakers: Mr. Greig Bolderrow from Fraser Coast Tourism and Events, Jo Charters & Steve Howard from TAFE Queensland, as well as Michelle Hay from the University of Sunshine Coast.

Greig Bolderrow spoke to the role of Fraser Coast Tourism and Events within the region, identifying the current target market that is being attracted to the region, new marketing and initiatives, as well as visitor performance and overall growth to the region.

Michelle Hay gave a brief overview of the current challenges the University has had to overcome with students returning to campus next week in a blended learning setting. Based on the current climate, the University has extended this out to next year with many courses following a blended learning style. The Fraser Coast campus will have over 50 courses available to Fraser Coast residents which has extended their offerings based on this new model in 2021.

After the three key speakers, participants were able to network with food and refreshments provided.